A week or so ago I was able to spend several days exploring Utah.  I had driven through Utah plenty of times while making my way to and from California but had only spent time on the highways or in hotels around Salt Lake City.  I love in-state trips in Colorado but it’s still cold off and on at lower elevation and the high country still has plenty of snow and is way too cold for me for exploration that includes camping.  So, we headed to Utah!

Our plan included driving to Springdale, Utah on Thursday, camping on BLM land and heading to Zion National Park on Friday morning for two nights and three days of back country camping before heading towards Bryce Canyon National Park and staying in a cabin for two nights.  Ben had obtained a back country permit for us and we were planning on backpacking the East Rim Trail.

We did camp on BLM land on Thursday evening.  Prior to finding our spot, we stopped in Springdale at the Sol Foods grocery store and picked out sandwiches and a cheese & meat tray. After, we followed the road to the BLM area where we were allowed to drive up the 4WD road (which was pretty bumpy and crazy, I might add) and pick out a spot.  Our view for Night #1 was not too bad: 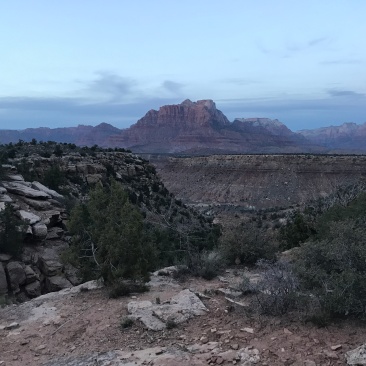 The next morning we packed up and left for Zion National Park.  It’s $30 now, per vehicle, to enter the park.  We obtained our back country permit at the Visitor’s Center and drove to the trail head.  In the busier and warmer months, which normally starts in late March and goes into late fall, Zion National Park’s main canyon road is closed to all cars unless you are staying at the lodge in the Canyon and are given a Red permit to drive to/from the lodge.  All other traffic MUST take the free shuttle that stops at 6-7 different stops in the Canyon.  Our trail head was not in the canyon, it was up and around the canyon, so we were able to drive to the trail head and park there.  We began our hike with our backpacks, plenty of sunscreen because it was really hot, and a lot of excitement!

The East Rim Trail reminded me much of a hike I did in California in August 2015 with my dad and his wife, Linda, to Winnemucca Lake. This hike was not as pretty, but kind of similar intermittent forest & desert terrain.  The beginning of the hike included much more dessert-like hiking.  Red rocks, a lot of dirt and sand and being able to see Canyon views.  Once we hiked about 4.5-5 miles or so we reached the top of the Mesa and the terrain changed.  We were on top of the Mesa which meant it was foresty (Excellent word choice, I know) with Ponderosa Pine trees, plenty of bushes, many deer and colder temperatures because of the elevation gain.  Some mud, some snow patches but because of such abnormally warm March temperatures, almost all of the snow on the East Rim had already melted.

To be honest, we were not expecting quite a change in scenery from the desert we had trekked to Utah for….  the pictures we viewed of the East Rim Trail were different from what we were seeing as the online pictures must have been from the other side of the East Rim, which we were planning on getting to the next day.  Most importantly and not to our favor, we learned at the Visitors Center that we were only allowed to camp ON the Mesa, meaning no camping with desert views or near the Canyon.  As much as we both remained optimistic….. we were a bit bummed.

After 6+ miles of backpacking, we found a spot near a spring so we could collect water and we set up camp.  That night we made dinner – backpacker meals using the jet boil, drank hot chocolate and camped under the stars.  It was COLD that night but the stars were plenty.

The next morning we decided to break our original plans and head back to the car.  We’d camp on BLM land again for the beautiful desert views and then explore Zion Canyon in the morning and hike Angel’s Landing.  Angel’s Landing is a strenuous hike that leads to incredible views.  We had researched the hike for a few weeks and were so excited!

Our trek back to the car was another 6+ miles.  By the time we reached the car we were hot, sweaty, exhausted, blistered and hurting.  Also, we met two college guys on the trail who asked for a lift back to the Visitor’s Center, so we had two extra people in the car for the 30+ minute drive back.  The trek back was tough but pretty and included deer, the canyon, the waterfall, the hot sun & heavy packs. 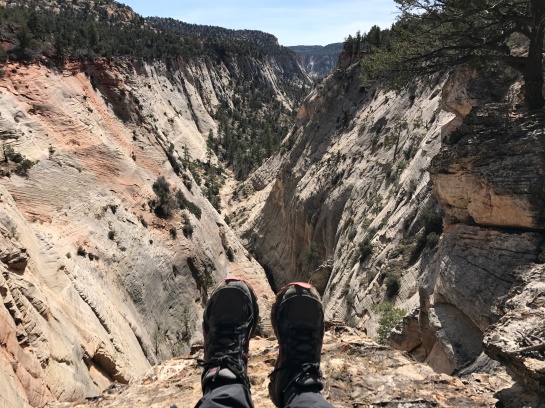 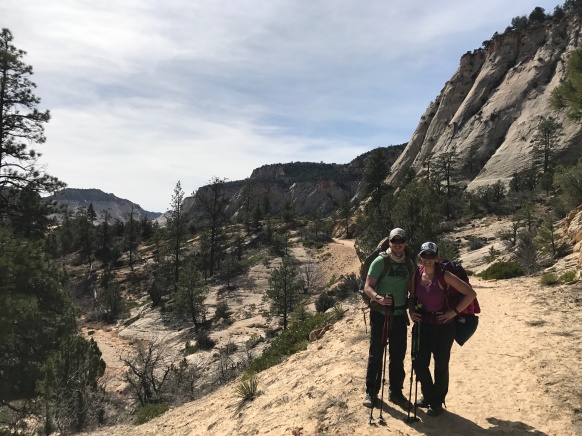 The drive back included seeing the above goats.  And me so thankful, but exhausted, after arriving to the car. Backpacking is no joke.

Once back in Springdale, the town outside of Zion, we went to the store again to wash up a little.  Thank you Lord for nice, clean public bathrooms 🙂 We grabbed some fire wood and some snacks and headed to the BLM land again to set up camp for the night. Our camp spot views were beautiful. 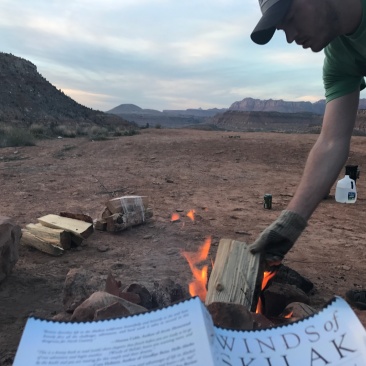 Ben made a fire. I read. We made dinner (backpacker meals with the jet boil!) and enjoyed our mildly warm night – MUCH warmer than the night before. It was also incredibly clear outside so we could see stars, relatively quiet on the BLM land despite being near the road and a great place to camp for free.

On our fourth morning we woke up and were sore, dirty and exhausted but determined to explore Zion Canyon and hike Angel’s Landing.  We headed back to Springdale.  We opted to enjoy a sit down breakfast and plenty of coffee at MeMe’s Cafe outside of the Park and see how we felt to ensure we really did want to go hike Angel’s Landing despite our blisters and messed up skin from the backpacking trip.

Angel’s Landing is a heavily trafficked, strenuous, 5 mile round trip trek with 1,488 feet of elevation gain.  After breakfast and relaxing we felt better and decided to go for it.  I bandaged up my toes (they were heavily blistered) and we headed back into the Park, parked at the Visitors Center and caught the shuttle which took us throughout the Canyon to The Grotto, which is the stop for the Angel’s Landing trail head.  We started our hike. 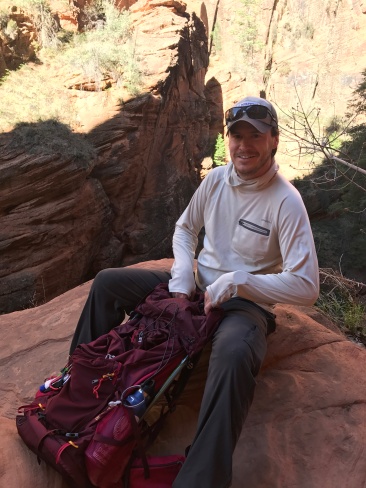 The first couple of miles are paved. Switchbacks.  Much of the area is exposed to sun and it’s hot.  There were a TON OF PEOPLE.  I’m not a fan of many people on the trail so this was a bit annoying for me.  On one hand, I am happy to see people out exploring our National Park’s.  Id so much rather see kids out on their spring break enjoying our National land’s than sitting on a beach or playing video games or sitting in a theater. There is nothing wrong with any of that – but I’d rather see them outside exploring our beautiful country.  On the other hand, I am a hiking snob and want the trail to be less packed.  I enjoy the quietness of nature.  This was not quiet.  This trail was extremely busy. 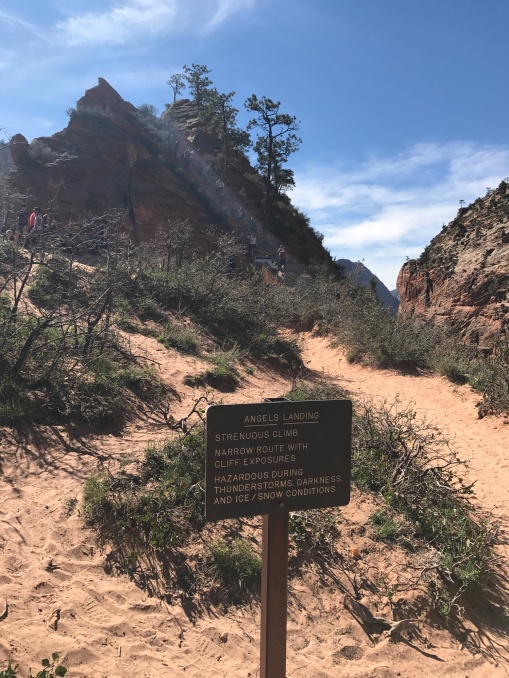 When we got to the scariest part of Angel’s Landing, I freaked out a little bit.  If you don’t know… I am terrified of heights.  To the point where many times I cannot complete certain hikes because I shut down.  Many people say they’re terrified of heights.  But they keep going and they finish their hike.  My fear is so bad and so irrational that it literally causes me to get so anxious that I have to stop and turn back.  This has been a problem of mine for years and while I’ve gotten better with managing the fear and can often continue on my hikes, I still have days were I am so scared that I stop, anxiety takes over, and I HAVE to turn back.

For 20 minutes I sat on a slope and contemplated whether or not I could complete the Angel’s Landing hikes.  The drop offs were steep.  There were poles with chains on the sides of the ledges in which we could hold on to while hiking the steepest, scariest parts.  But there were so many people that I felt very uneasy.  SO MANY PEOPLE.  I mean, thousands.

Ben was patient, and kind, and waited until I made my decision.  Eventually, after going back and forth with my decision….. we started the trek towards the top of Angel’s Landing. 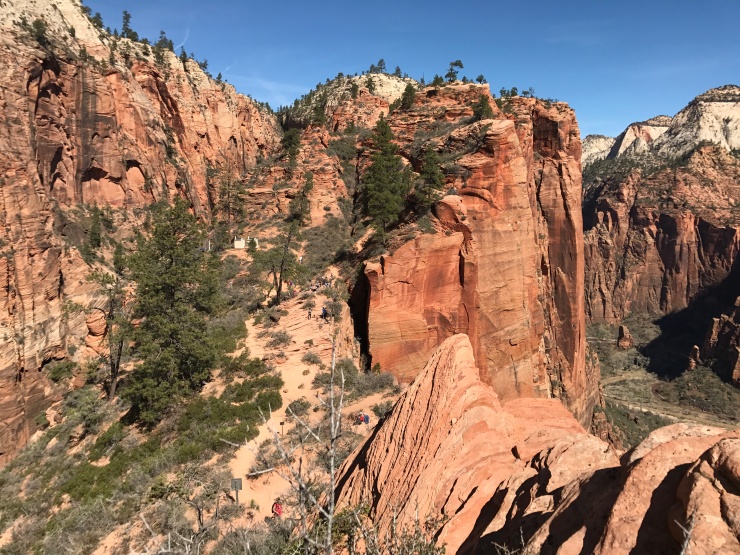 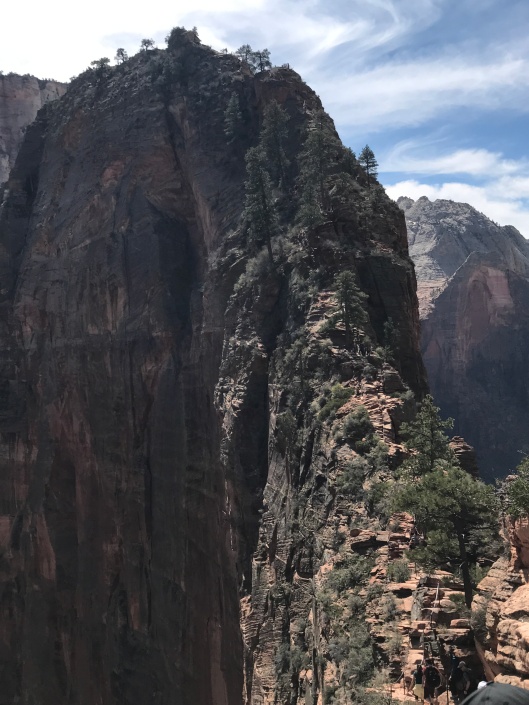 This, above, is the ridge we walked along. 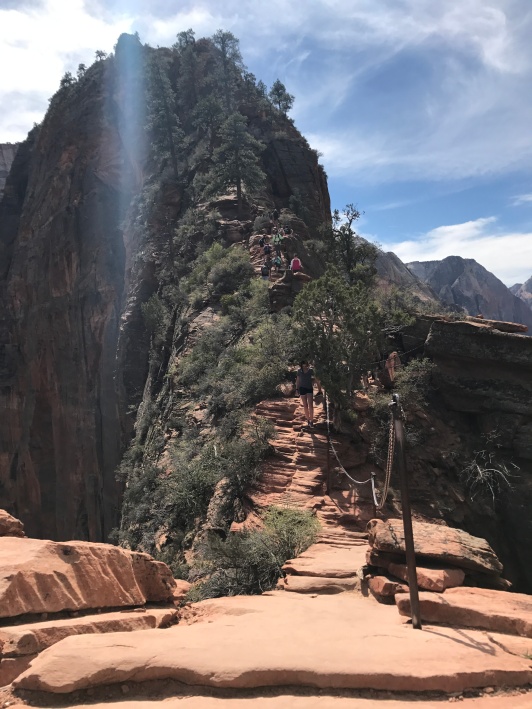 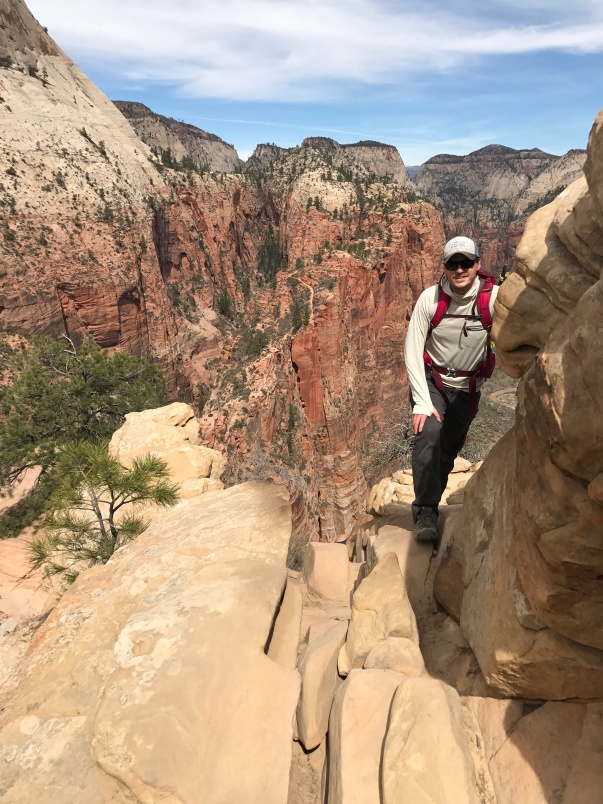 Ben, with the hike behind him.

Above is Ben heading back down. 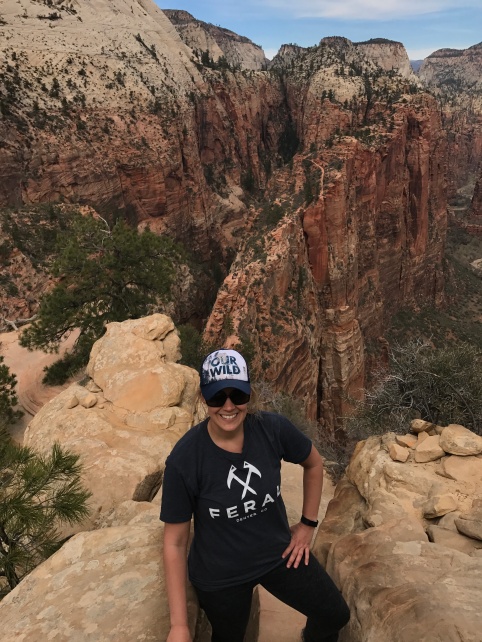 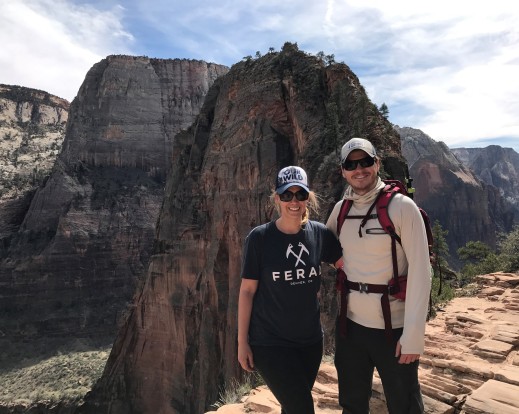 In this next picture of Ben, if you look closely, you can see a major part of the trail where there are the chains for safety down the steep, narrow part.  And, of course, you can see the drop offs. 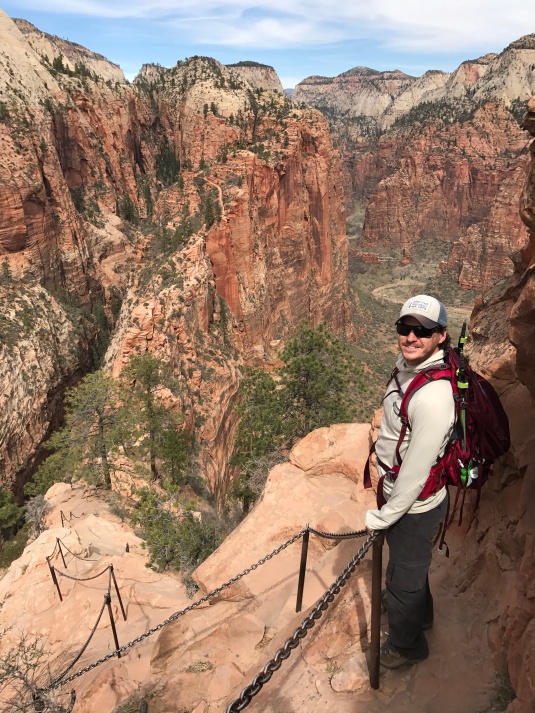 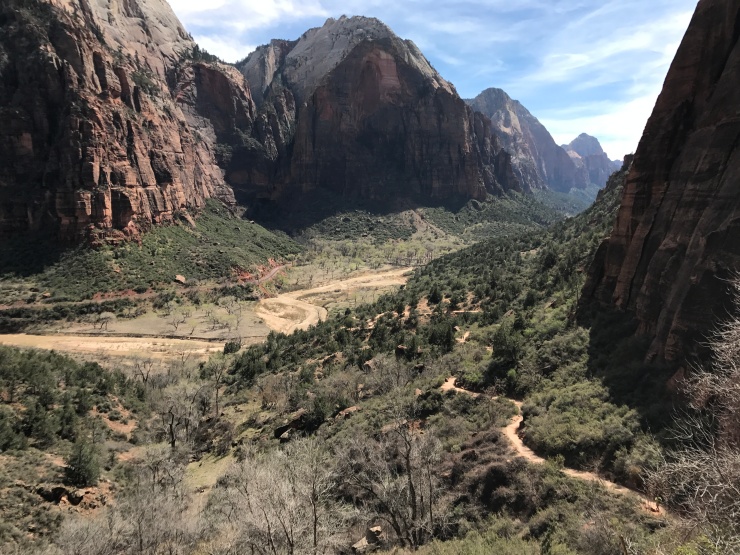 We made it back down to the shuttle.  We were hot, tired, dirty, sweaty, hungry….. but we felt accomplished.  What a hike!  We got back on the shuttle, rode to the Visitors Center, got the car, went back into Springdale to grab so groceries and then started out trek to the cabin where we’d spend the next 2 nights while exploring Bryce Canyon National Park.

Zion National Park is unparalleled in it’s unique beauty! I can’t wait to go back and explore more of the Park.